Basking in the Basque Country and chilling out in Cantabria 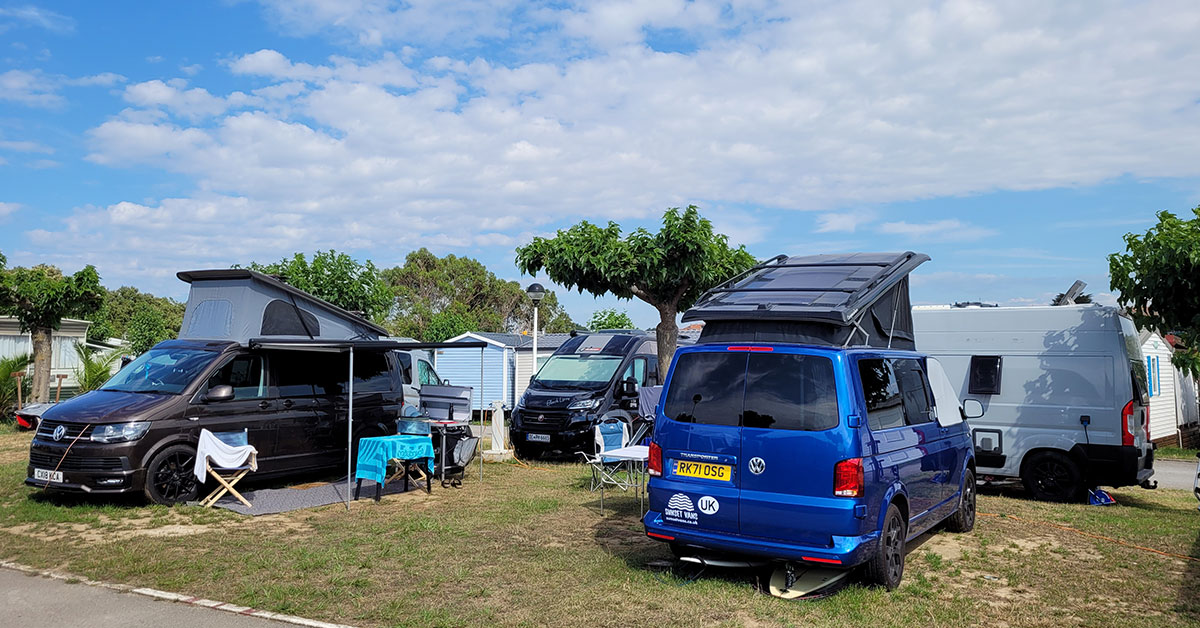 You are spoilt for choice when it comes to camping options along the Basque and Cantabrian coast. While Camping Derby Loredo offered the pitch perfect location with direct access to the fabulous Somo beach, the site itself did not come without its challenges…

They say you should never go grocery shopping when you’re hungry. By the same token you should never chose a campsite to stay in, commit to it for a fortnight by booking and paying up front in a moment of ecstatic enthusiasm to be finally getting abroad for the first summer in three years.

To be fair, this decision wasn’t entirely a rush of blood to the head or a whim of desperate desire for some sunshine, we had actually cased the joint.

But we did so when we were ‘hungry’ – on the final day of our holiday in 2019. We walked the sandy beach from Somo village, along the turquoise waters of Santander Bay, the city glistening in the sunshine across the way, as our stroll took us to one end of the 8km beach towards the village of Loredo (not to be confused with Laredo which is a larger town elsewhere along this Cantabrian coastline) to discover Camping Derby Loredo, perched right on the edge of the shoreline, with its own direct access to the beach. 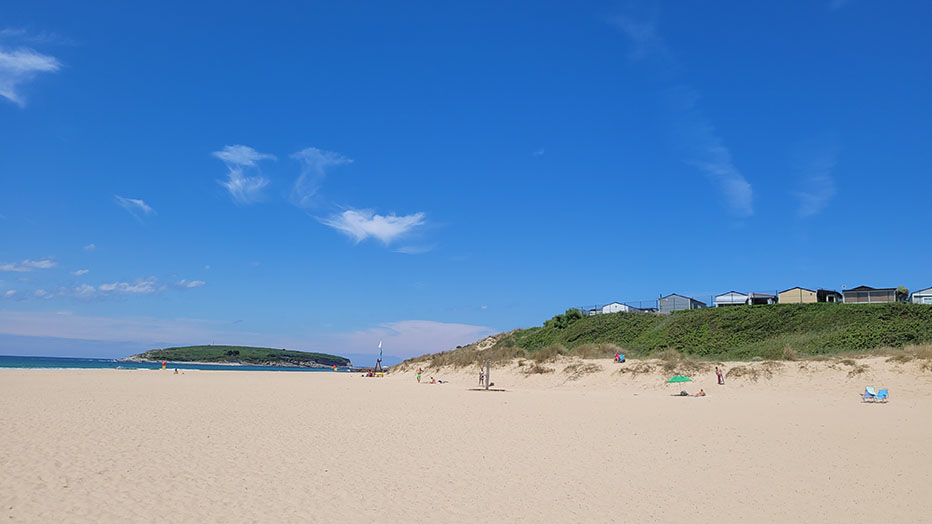 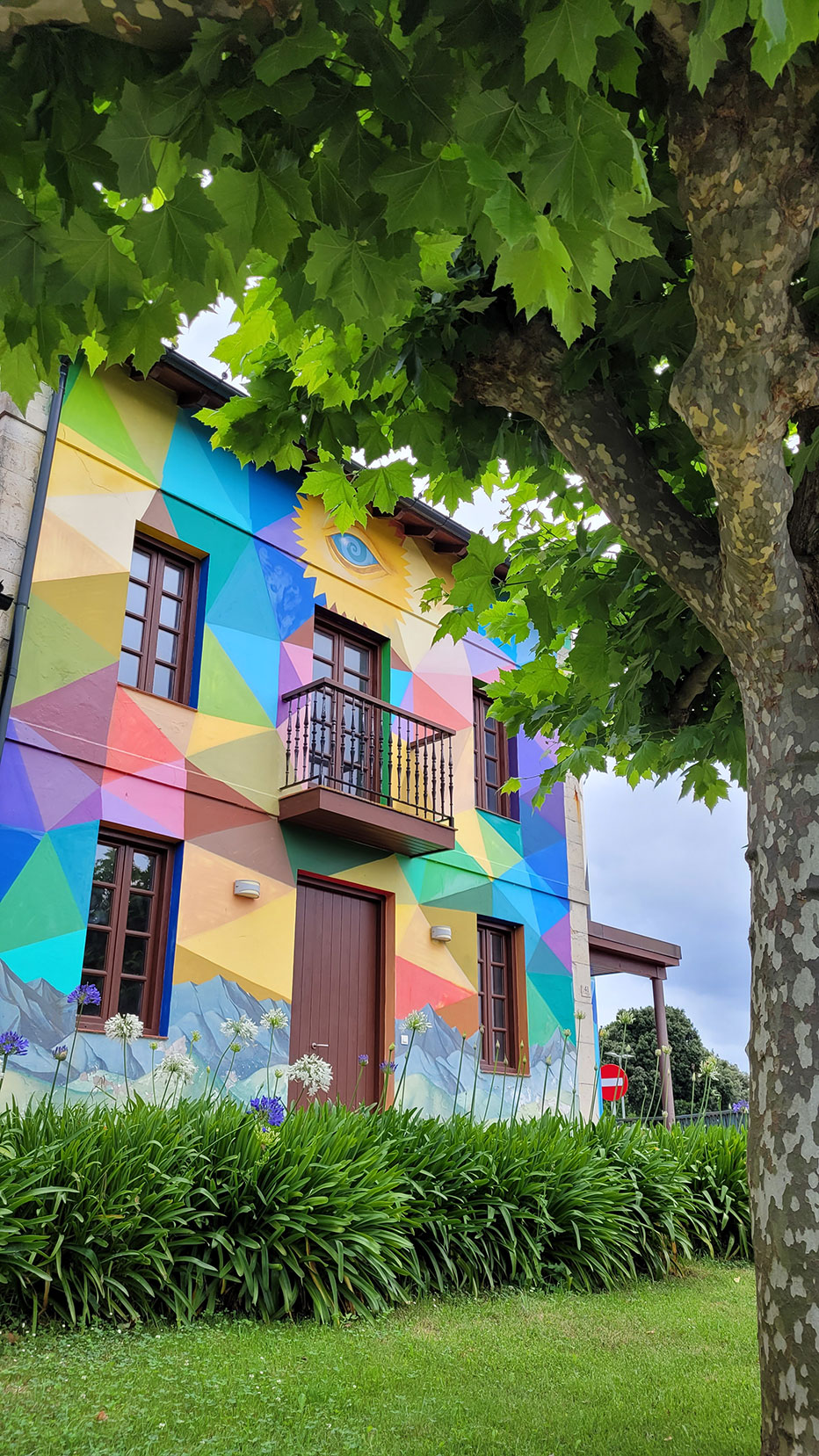 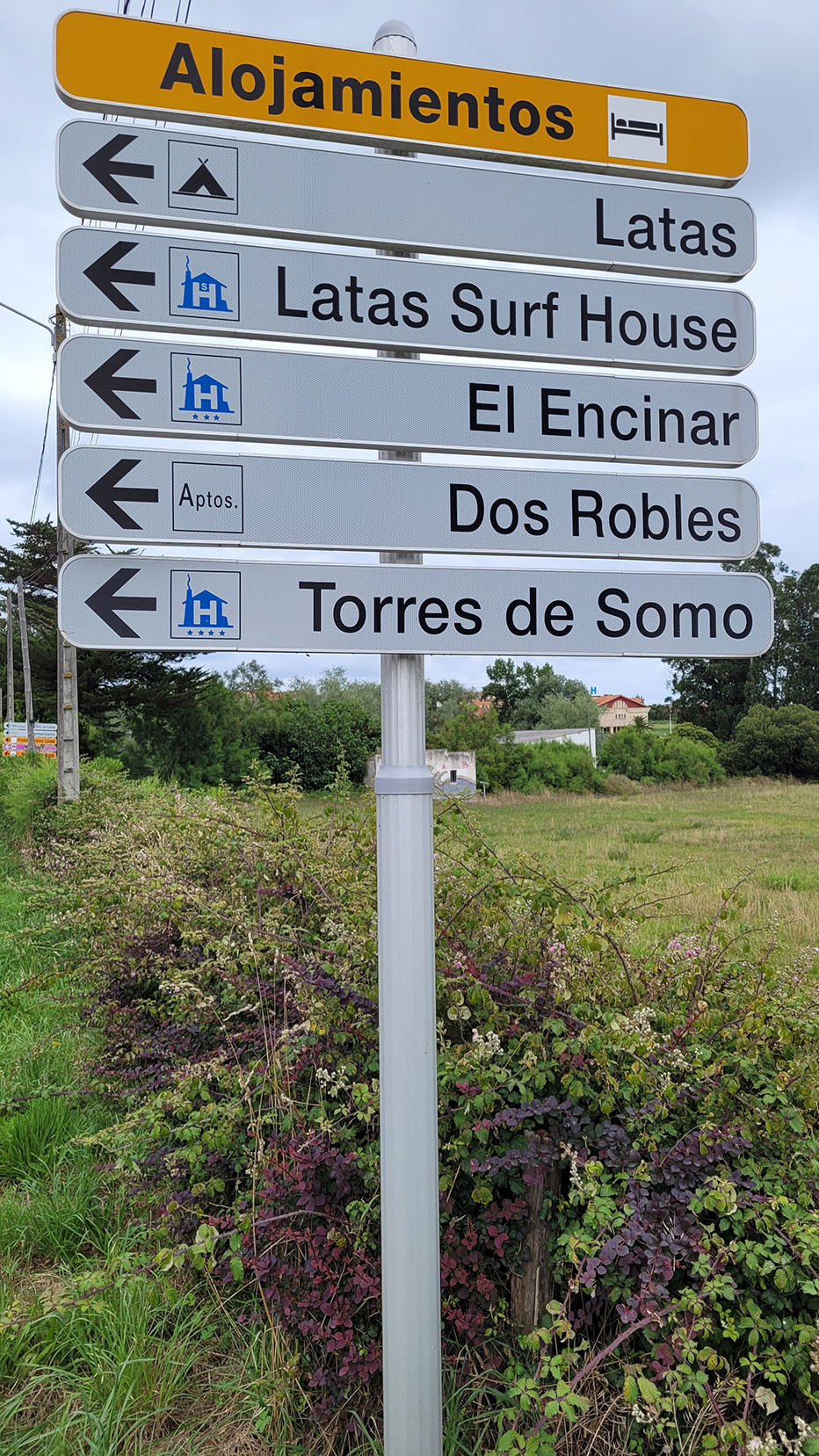 Wistfully we watched the crowds take the easy route to the beach as others sipped sangria and cold beers on the terrace overlooking the dunes, the beach stretching down along El Puntal and Santander a stone’s throw and 20 minute ferry ride away. Camping Derby Loredo looked like camper heaven.

How had we missed this place before now? Why wasn’t it on our radar? The perfectly located campsite at one of the best surfing locations in Europe, set against the backdrop of the Cantabrian hills, an eco-park in the famed Ribamontán al Mar region popular with hikers, cyclists, and nature lovers along the route of the famed Camino de Santiago and the Cabárceno Natural Park less than 20km away. 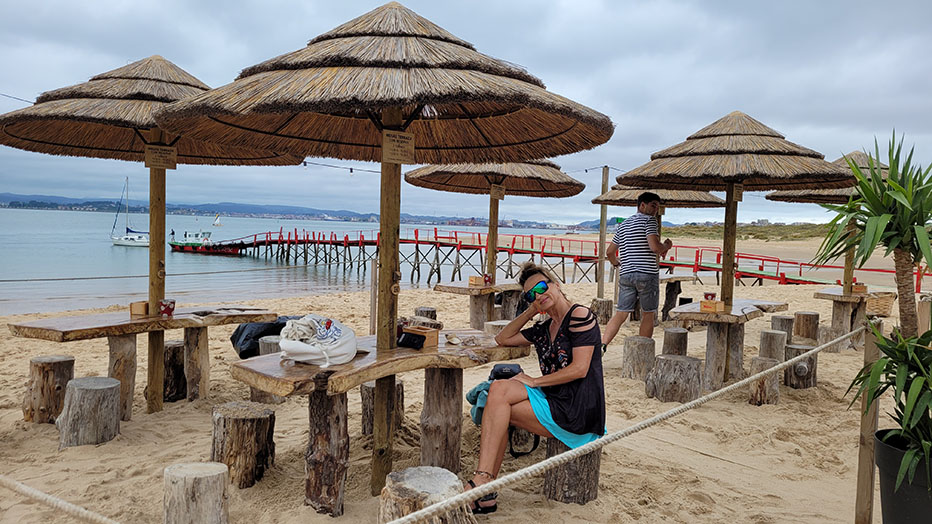 Camping Derby Loredo wasn’t on our radar as it’s not in any of the guidebooks or tourists’ listings or included in the catalogue for Campings de Cantabria. There’s nothing unusual about that. Lots of good campsites opt not to sign up or register with the official bodies. We investigated further. It was a bustling site, no charge or metered payment for showers (which is a bugbear of ours) and the place seemed fine. We even selected our preferred pitch, number 69, as it was away from the toilet and shower block which can be noisy, not too close to the entrance and with permanent chalet residents as our nearest neighbours. In any event Camping Derby’s proximity to the beach trumped all else. Chalk it down. We would definitely be back.

In 2019 we had stayed in Camping El Arbolado. It was a really good site, family run and very well managed and maintained. While out for a recce on our bikes we also sussed out the nearby Camping Latas, another excellent family run site.

The difference was that they both required driving, albeit a relatively short distance, to go surfing. We had our hearts set on the idea of getting up each morning, having a coffee and putting the surf boards under our oxter and walking to the beach for a fortnight of daily surfing off the sandbars along this magnificent stretch of beach. Then adjourning to the beachside surf bars for refreshments, as we soaked up the sunsets on the western horizon, watching the cruise and cargo ships out of Santander sitting high in the water making their way through the channel. From our campsite walk to Chiringuito El Puntal Tricio and soak up a Caribbean vibe as we sipped our sangria in this idyllic corner of Cantabria. 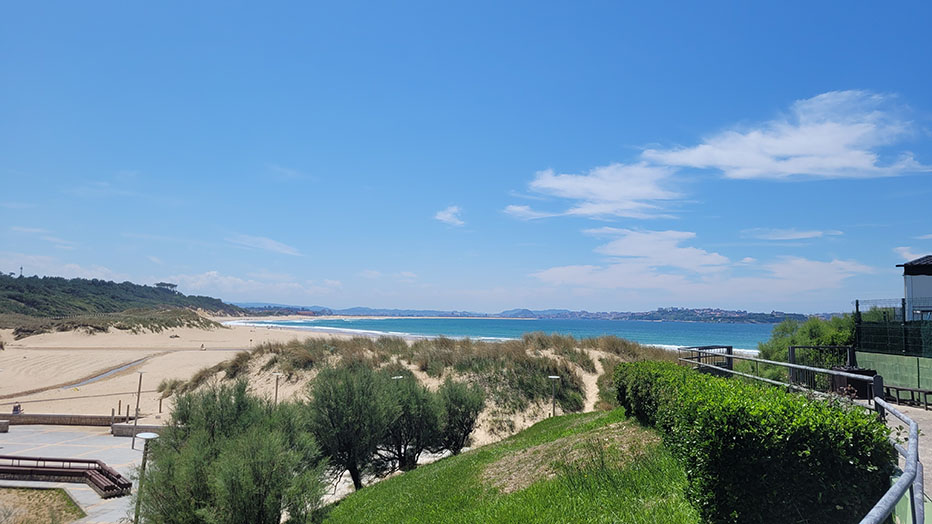 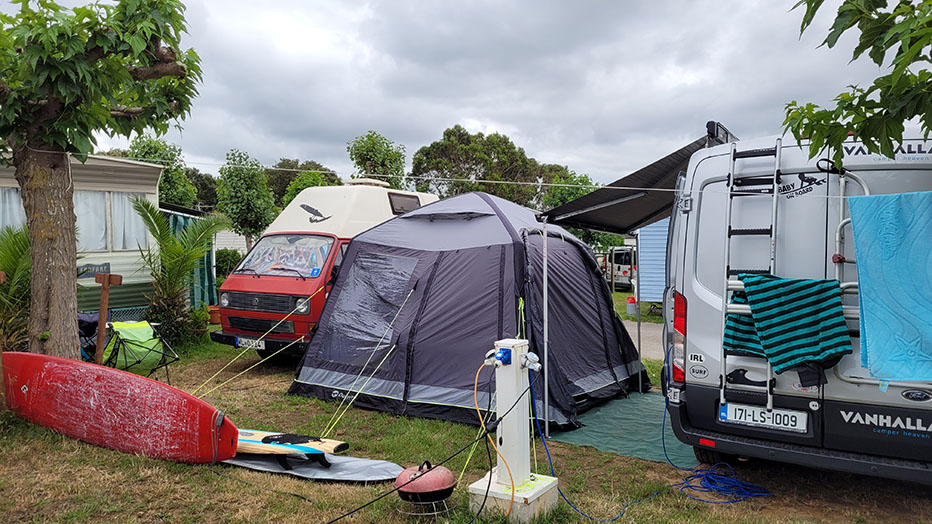 Sure, Camping Derby Loredo was busy and noisy; sure, some of the pitches seemed impossibly tight, barely the width of a VW Transporter and not enough room to swing a cat, much less an awning. The sign in the shower block stating, ‘It’s Forbidden to feed the Cats’ was a bit bewildering, but what could possibly go wrong? Camping Derby’s prized location would surely trump all else… 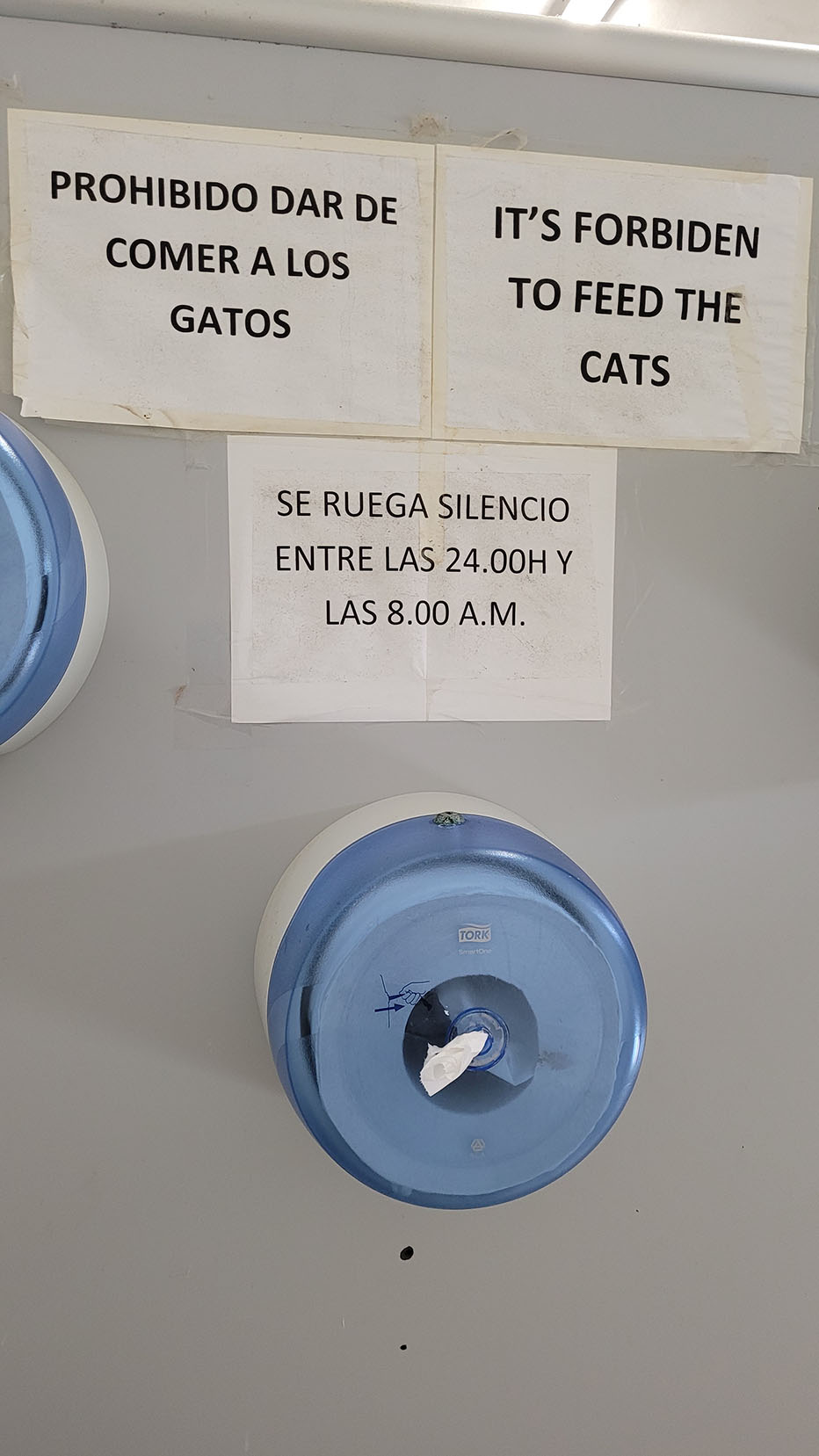 Taking the Connemara Ferry from Rosslare to Bilbao

The best and most direct way of getting to this part of Spain at present is by Brittany Ferries who run a twice-weekly service out of Rosslare to Bilbao on Wednesdays and Saturdays. The route is currently served by the Connemara Ferry, which is adequate but a basic enough tub, which Brittany describe as an economy service and that it is. The crossing requires each passenger to have a cabin to sleep overnight and these are pokey, ostensibly sleeping 4, with overhead drop-down bunks. The deck and lounge areas again are adequate but small; there is a bar and coffee dock with breakfast, lunch, and dinner available during the opening hours of a self-service restaurant. It’s a ferry, there’s no fine dining, it gets you there and seasoned travellers have hatched workarounds such as bringing aboard their own packed and prepared food and cooler boxes. There is a microwave available at the self-service area. The journey takes on average 28 hours. The Brittany Ferries service initially ran from Cork to Santander but was changed to Rosslare to Bilbao at the behest of the commercial haulage sector who found that more advantageous post Brexit.

From a motorhome enthusiasts’ point of view, it’s much of a muchness. The route is reliable and affords access to a much-underrated part of Spain and beyond. Such is the demand and popularity of the service Brittany Ferries have indicated that they plan to upgrade the ferry servicing this route in the autumn and that would be welcome.

The real beauty of this Brittany Ferries service is that it opens a world of campervan touring pleasure right along that incredible Cantabrian and Basque coastline. For those with extra time on their hands it presents the additional opportunity to head further into Asturias, Galicia and down into Portugal. It also avoids having to trek down through France from the more traditional crossings into Cherbourg and Roscoff with the time, fuel and tolls costs that entails.

The caveat of course, that’s if you have already explored the camping delights of Brittany, La Rochelle, down to Bordeaux and the amazing Grande Dunes du Pilat at Arcachon Bay – an area which unfortunately bore the brunt of some of the worst wildfires in Europe during this summer’s heatwave.

Biarritz Camping is always a delight

Once you land in Bilbao, it’s 150km and less than two hours to Biarritz, again another surfers paradise. The best campsite here by far is Biarritz Camping, owned by the former French rugby star Dimitri Yachvili (and Irish rugby legend Ronan O’Gara are among those who holiday here with their families). If you prefer a more informal and less expensive Aire arrangement there’s one just around the corner at Aire Milady. However, I cannot recommend Biarritz Camping enough from it’s high standard of service to its easy access to local beaches and Biarritz a short bus ride, cycle or walk into this delightful city. The number 38 bus stops right outside the campsite gates (and the temperature was also running at 38 degrees!!). If you want to be more adventurous, at low tide you can walk along the beaches and the seafront and into the city, the Grande Plage, past the opulent Hotel du Palais and onto the landmark 1831 lighthouse. 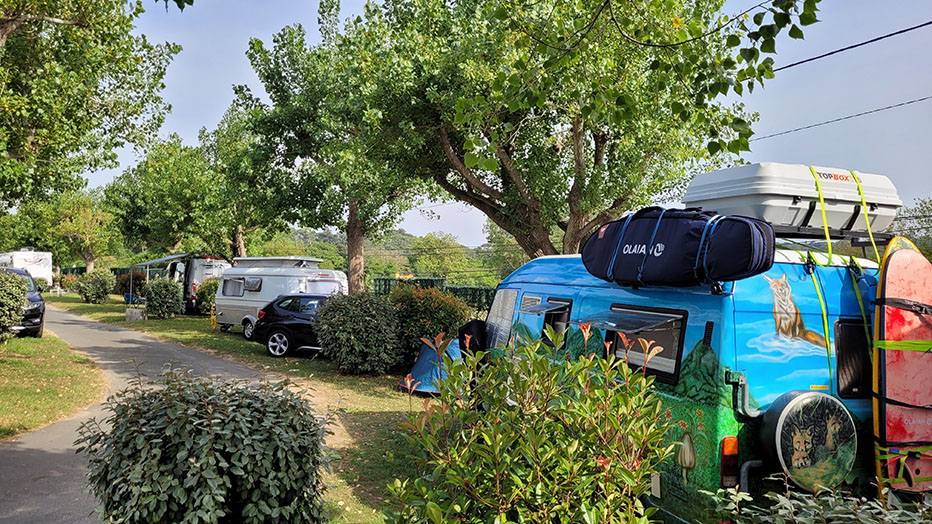 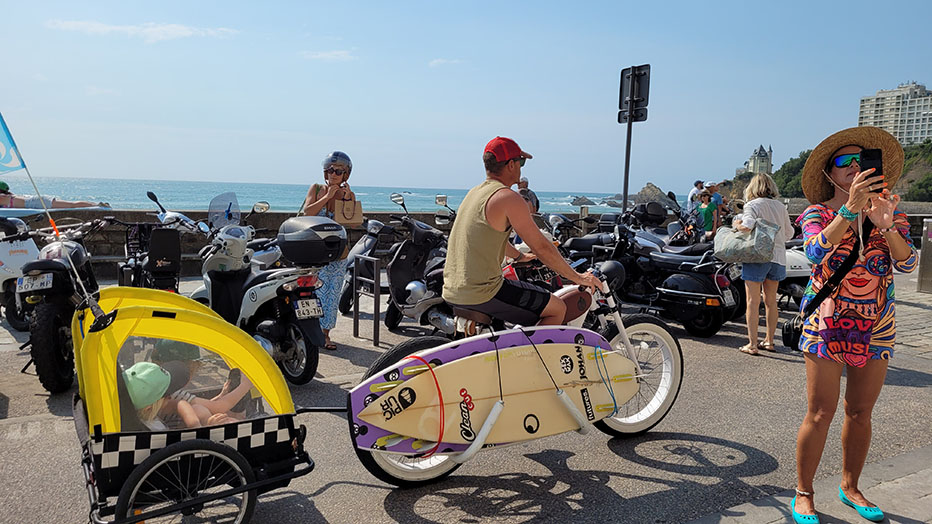 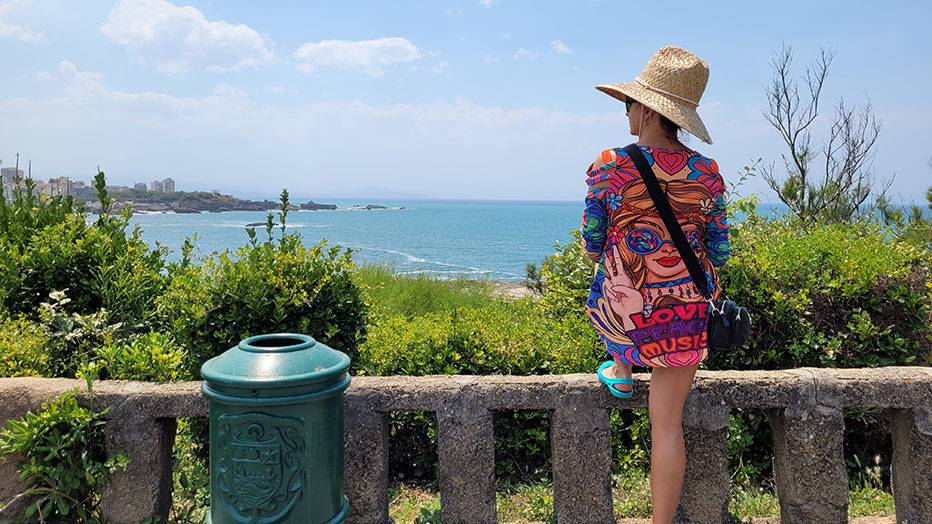 If this is your first time to take the Bilbao crossing, then it would be sacrilege not to include a visit to the city and the Guggenheim on your itinerary, while a stop off at San Sebastian and St Jean de Luz for their culinary delights are a must. Biarritz and these parts are mobbed during the high season, however, especially around the Festival of San Fermin (July 6th to 14th) and throughout August when Biarritz hosts a world class fireworks display along the city’s shoreline on August 15th, the Feast of the Assumption, and a public holiday.

The surfing aside – and it was excellent – we weren’t sorry to depart Camping Derby Loredo after a fortnight. The laissez-faire style management took its toll as the campsite is badly maintained, poorly cleaned, over-crowded with constant pitch encroachment, no hot water in the wash-up and dogs roaming unchecked and defecating everywhere. I could go on. The cool surfer chic of Camping Derby Loredo descended into near chaos. The location is great but couldn’t trump everything. 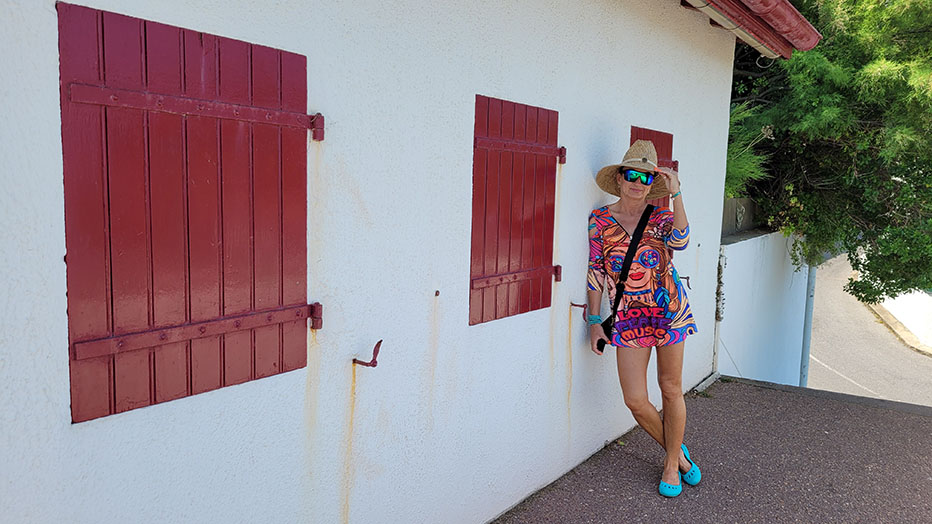 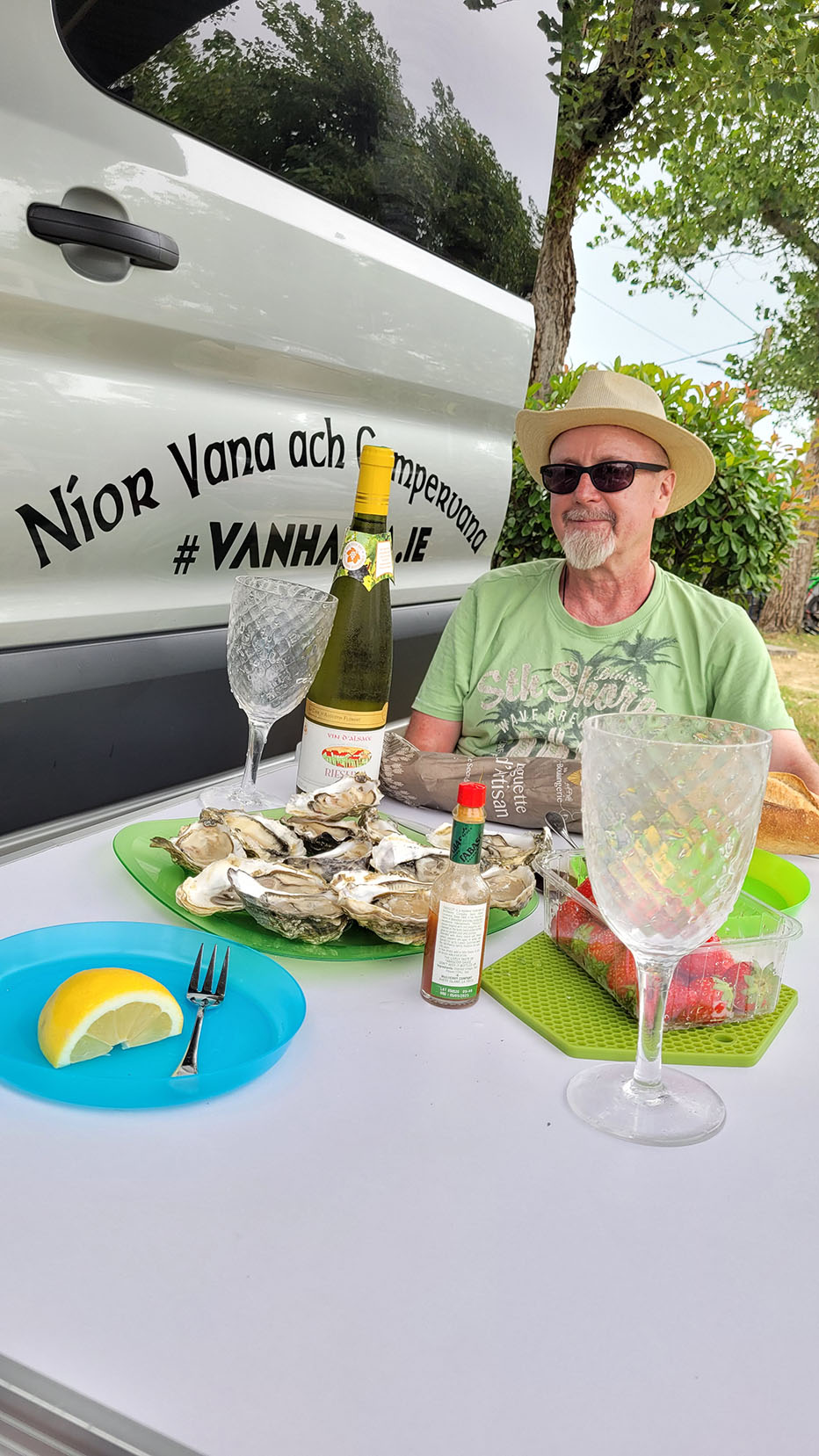 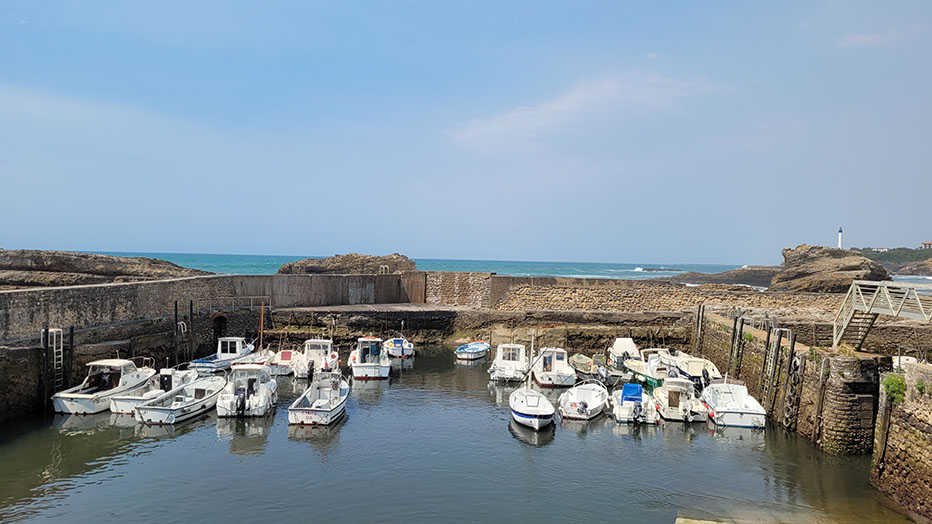 The Cantabrian coastline offers a world of possibilities

Taking the slow road back towards the boat in Bilbao we gave ourselves 4 days to saunter the two-hour journey. We stumbled on the delightful Camping Playa La Arena (see separate review) near the village of Isla. At €41.90 it is the most we have ever paid per night for a campsite, anywhere. It was worth every penny. We opted to stay on a second night and explore the stunning tidal estuary along the Ria de Ajo and the Playa Los Nudistas. We hit on Playa Madre, a cool, chilled out beach bar and lazily watched the tide coming and going in the hazy sunshine.

It was with reluctance we departed Camping Playa La Arena at Isla, it’s easy access steps to the beach, a stairway to heaven. Nudging back towards Bilbao for our final night we hit the jackpot and found a perfect wild camping spot at Playa de Orinón, nestled between two Ben Bulben-esque escarpments. With eagles circling overhead it was the perfect off-grid pitch on which to spend the last night of our Cantabrian adventure, with a swim and a surf on the agenda before finally heading the 40 minutes run to the ferry.

From Biarritz to Somo and on to Orinón we had filled our boots with surfing, sunshine, and seafood, with a glorious sunrise on our last morning to charm us on our way. We’ll return for sure, but not to Camping Derby Loredo, because sometimes location can’t trump everything…

We booked Brittany Ferries www.brittany-ferries.ie  in January to travel on June 15th, return July 7th; cost for 2 adults with campervan €1600. 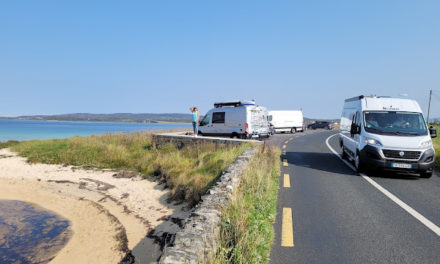 Everything is autumn – awesome opportunities for great off-peak camping 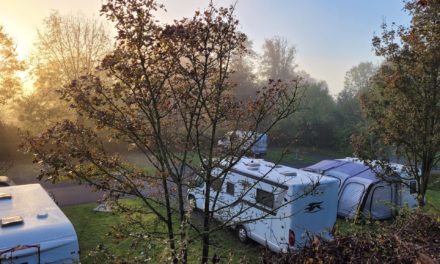 Kilkenny all a buzz and bustle beneath clear autumn skies 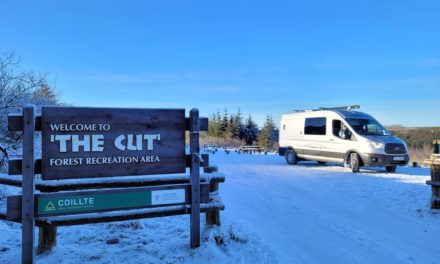 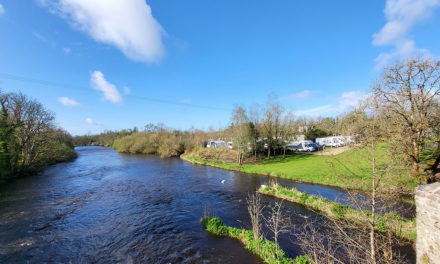 Back to Battlebridge in a heartbeat

Bannow Bay Seaside Farm Motorhome Park is an ideal spot if you want to delve into the countryside, based on a working dairy farm with pristine beaches just across the fields... and it's open all year round... Visit Wexford Ireland's Ancient East

Bannow Bay provides a home from home for the rural road trip enthusiast and families seeking to immerse in nature, allowing you to live slap bang in the
View on Facebook

Vanhalla · 3 days ago
@Vanhalla1
Delighted to see so many of our favourite Vanhalla Camper Heaven spots featured here. You can also check out and compare our reviews on https://t.co/QOmFoYe0OG
https://t.co/1vuLGa0XEQ
View on Twitter
1
1
Follow @Vanhalla1