The gift horse of camping and the Fungie factor

There have been mounting complaints about congestion, littering, and ‘illegal’ overnight parking in popular stop-offs such as Killarney, Hook Head, Achill, Westport and Terryglass.

In 1983 a young bottle-nose dolphin showed up for the first time in Dingle Harbour.

What would normally have proved a mundane enough event in the busy fishing port has instead remained a phenomenon, 37 years later.

The stories are legion, the folklore is teeming – this is Kerry after all – with tales of the exploits of the friendly dolphin which continues to flirt, flip, fascinate and find favour with locals and countless visitors for years on end now. 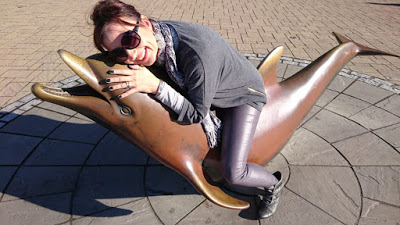 There is even a story, perhaps an urban myth – this is Kerry after all – that at one time, rival tourism interests from the town of Cahersiveen across the bay attempted to lure the frolicking flipper away over to their side of the coastline.

The guts of four decades later, Fungie is still doing the business for Dingle. People who were brought to see him as children are in turn taking their own kids to see the famous Fungie.   The good people of the town have immortalised their favourite dolphin by erecting a statue to him slap bang in the middle of the busy port. The only other one to get that treatment in town is former Taoiseach, Charles J Haughey. Both have done their bit for tourism in Dingle.

Now Dingle has much to commend and recommend. It’s a place you go back to, time and again.

The landscape, heritage, music, food, culture. We think of the language, the Gaeltacht, the lore, the pubs, the craic, the possibilities, the football, the Dingle Regatta, Other Voices, the popularly acclaimed Oscar winning Ryan’s Daughter, fresh fish’n’chips, the local ice cream, Inch Beach out the road, Ventry and Dunquin out the other road. Dingle has plenty to say for itself.

Yet, other than the stunning Ring of Kerry and its countless gems on the neighbouring Iveragh Penninsula, few – if any – single attractions can boast the inter-generational appeal and pulling power of Fungie in Kerry for almost forty years.

Not that I want to tempt fate but not even Fungie is immortal. Dingle and Kerry need to start planning for life after the famous fish heads off, as the song goes, and we’ll all see him someday in Fiddler’s Green.

In the meantime, there is the marketing genius that is the Wild Atlantic Way. The success of the WAW is sheer brilliance. 2,500 km of stunning coastline which passes through three provinces. 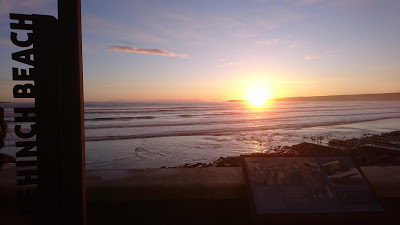 The Wild Atlantic Wayhas been around long before Floki and Ragnar set sail in their longboats from Kattegat, but it is only in recent years it has been really rediscovered thanks to a quirky name, road-map, some quaint rustic signage, a legend and the locals do the rest.

Trouble is, with no outbound ferry options in staycation 2020 everyone is setting sail for the Wild Atlantic Way, a victim not of the Vikings, but its own marketing master class.

The good folk of Dingle could never stand accused of looking a gift dolphin in the mouth, but the Irish tourism sector could face the charge of looking the gift horse of the camping boom in the face and blithely ignoring the vast opportunities it presents.

There is not a camping bunk, bed or berth to spare in the country this weekend.

The post-Covid-lockdown-cabin-fever has led to an unprecedented upsurge in demand for all things camping. There is a run on everything from tents, to motorhomes, campervan rental and campsite spaces.

A combination of factors has conspired to make camping real estate much sought after. A place to pitch your tent or park up your campervan is hot property. The Garda have even had to issue a public warning due to a spate of caravan robberies fuelled by the demand and the opportunistic criminals who would try to cash-in.

No ferries, no campsite spaces, no tents allowed, no toilets or shower blocks open is all adding up to a major headache for seasoned campers this summer as we head in to the Irish and UK bank holidays and the peak August holiday season.

Nevertheless, out of such challenges should spring opportunities.

The campsites which have adjusted and responded well are out the doors busy, albeit with Covid restrictions and protocols in place. Many are not accepting tents, as toilet and shower blocks remain closed. Some have been innovative and created additional space and promoted the basic services of water, electric hook-up and waste disposal.

Ardmore Seaview Motorhome Park in Waterford is a case in point. A fairly basic beach facing field with water supply and waste disposal, it is doing brisk business since the lock-down restrictions lifted on June 29th. The owners are keeping touring campers informed as to availability of spaces on site with twice-daily online updates 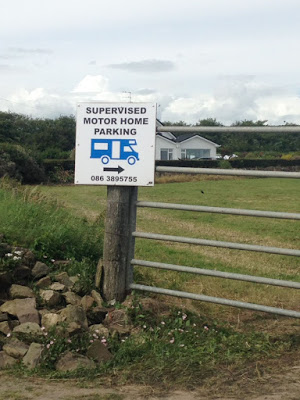 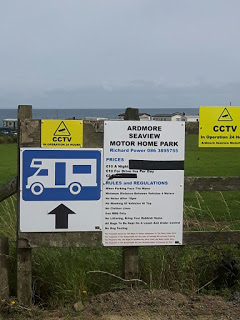 More affectionately known throughout the motorhome community as Dick’s Field, this family, off-farm enterprise is a good example of what can be achieved with a little bit of effort, imagination and ingenuity. While the services here are no frills, it is the seaside location in this picturesque village along with the friendly family, warm local welcome that keeps campers flocking back.

There are other similar examples around the country of people putting their space to good use and adding another string to their bow, such as Tom Malone’s Pub Parking in Miltown-Malbay. Likewise The Beach Bar in Aughris in Sligo is coming in for great praise for the camping friendly services it provides.

Towns like Cobh, Sneem, Kenmare and more recently, Easkeyand Castlegregory have also been innovative in welcoming campervans, even if it is just a fresh water source and black water disposal and a €10 overnight parking charge. Goosey Island in Sneem comes in for particular praise for its central location, accessibility, scenic location on the tidal river bank, pet friendly, with EHU and all for a tenner. 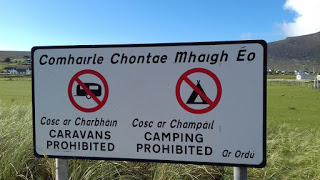 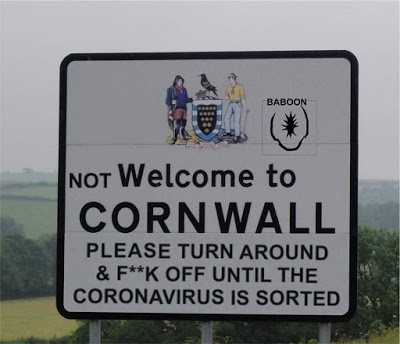 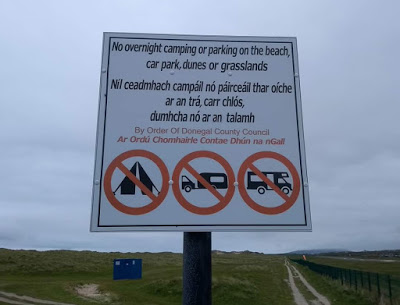 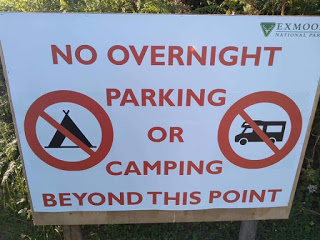 However, overall the reaction to the renewed interest in camping and the demand for campsites and overnight parking spaces has ranged from hapless to hopeless.

There have been mounting complaints about congestion, littering, and ‘illegal’ overnight parking in popular stop-offs such as Killarney, Hook Head, Achill, Westport and Terryglass.

Yet for all the demand for camping, the great outdoors and leisure activity based breaks there are whole swathes of the country that do not have even a single officially registered  touring campsite to tap in to the burgeoning demand. Camping enthusiasts insist they are good spenders and like to support local where at all possible. Largely this is the case.

Some places, like Dunfanaghy, welcome campers with open arms in a symbiosis that works for everyone; others grudgingly mark out a handful of designated motorhome spaces, which are often not reserved or respected, while it’s increasingly common for campers to be greeted with warning signs and headroom barriers making them unwelcome and driving them elsewhere.

The issues arising this summer are not unique to Ireland, but are also emerging right across the UK, with similar tensions and problems manifesting. A forum has been established to campaign for real Aires in England. Scottish camping enthusiasts have appealed for proper conduct for campers to respect the Highlands and the environment, so as not to provoke public outcry and spoil the camping experience for everyone. Meanwhile in Wales the authorities are issuing cautionary notices to deter camping in national parks and National Trust sites. 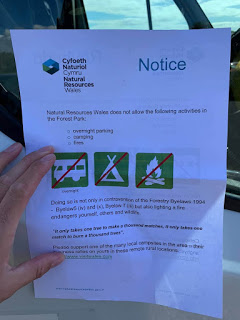 While there are those who see the possibilities and are embracing the opportunities; move along, get along, go, move shift, is more the order of the day from officialdom at least.

For this summer at least, enthusiastic camping enthusiasts are left looking wistfully at the sunny days of camping across the channel which is out of bounds for most this year due to ferry restrictions and quarantine travel rules.

Once overseas options resume however (the ferry companies are already discounting early bookings for 2021) Irish campsites and tourism interests may find they have missed the boat, if they don’t soon get their act together.

Campsites in Franceand Spain are generally far superior to here, with much better facilities and far less expensive… and we won’t even mention the weather. In parts of France overnight parking Aires with modest amenities co-exist and co-locate right beside long stay campsites. There is demand for both types of facility.

In Portugal this week the first in a series of Service Areas for Motorhomes located in Ponte de Sor, Alentejo, was officially opened by the Secretary of State for Tourism, Rita Marques marking the beginning of a multi-million euros action programme aimed at creating conditions to promote sustainable motor caravanning. This strategy envisages an integrated smart national network of service areas for motorhomes to capitalise on the increased demand for this type of tourism.

Meanwhile back home as we wait for the sun to shine and a campsite space to free up it appears that local authorities, landowners and landlords seem determined to sit out the camping spree and look this particular gift horse in the mouth.

SEE ALSO: Carry on camping… the #staycation of choice for summer 2020 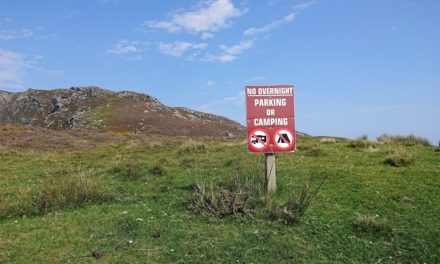 Eagle Point the perfect place to paddle your own canoe 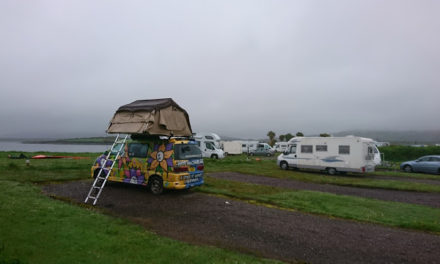 Through the mist, Cahirciveen remains music to my ears 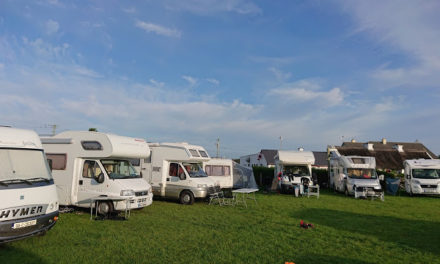