Carry on camping… the #staycation of choice for summer 2020

The lure of the great outdoors is proving irresistible as all kinds of camping has become the stay-cation of choice in the summer of 2020.
Welcome to 2020, the year the world went camping.
It will go down forever as the year of the #Staycation, when everyone and their mother dusted down the sleeping bags from the hot press, dug out the old tent in the shed, and tried to hire (or buy) a caravan, campervan or motorhome.

And here’s where it gets really tricky, to find a spot in a campsite complying with Covid-19 rules and regulations the length of your arm, that’s not already booked out until the end of August.

Camping is back in vogue, no mistake about it as families clamour to get out of the house with the kids, and ditch those cabin fever blues in favour of blue skies and the great outdoors. In fashion terms, camping is the new black.

Okay, it’s #staycation Ireland so make that the grey outdoors trading as the great outdoors, with blue skies an optional extra… like the charge for showers, electricity and awnings on most Irish campsites.

Nevertheless, hail, rain or… more rain, this is Ireland and the beaches are thronged and the campsites are booked out and we’re not going to let the odd shower spoil our lust for life post lockdown. We’re going to carry on camping! Everyone is going camping somewhere this year.

Recently retired RTE presenter Seán O’Rourke has hit the road and was spotted this past week in Dick’s Field, Ardmore in his 142 Hobby. Munster and Ireland rugby legend Ronan O’Gara has been tweeting up about the delights of family camping in Biarritz. (The best way to tackle Biarritz – see review here).

With a second Covid wave potentially lurking around the corner, travel bans, quarantine, self-isolation, ferry (and flight) cancellations and a rather uninviting, underwhelming and downright confusing ‘green list’ of destinations, well camping is your only man, woman and child.

While camping remains a most sociable affair it has an additional built-in advantage of physical distancing fitted as standard. You can remain mask-free and soak up the fresh air as you cook or chill, or seek that thrill of biking, hiking, trekking, surfing, this way, that way, on the blueway or greenway and sure whatever you are having yourself way.

Those who have already made a break for it are reporting comets in the night skies, ice cream cones, fish’n’chips fresh from the boats in Dingle, Killybegs and Kilmore Quay and stunning scenery to beat the band. What’s there not to like? 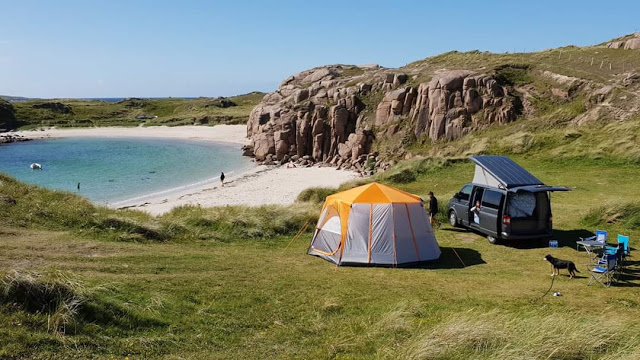 Well, here’s the snag. Camping’s return to fame has come at a price.
Full House, No Tents, No Showers & Stolen Vehicles

The upsurge in renewed interest in camping and the curbing of overseas options has led to many of the more popular coastal campsite locations being completely booked out for the peak season through July/August.

While there is some midweek availability, some campsites have not opened for the 2020 season at all, many are not taking tents, most require advance booking, and the majority are operating with reduced services with wholesale restrictions on kitchens, showers and even toilets. Numerous campsites are notifying that they are entirely booked out until the end of August, while others are only accepting campers with their own self-contained units.

At the same time there is mounting evidence that while campsite services and capacity may be reduced, prices are not, and indeed the indications are of price increases. Experienced campers are reporting prices upwards of €40 per night for a unit and two adults.

All these factors have conspired to generate other issues as campers, both veterans and newcomers, are forced to seek alternative options as they hit the stay-cation road. Not everyone can avail of the mid-week lulls and this has led to chronic traffic congestion at popular seaside resorts at weekends.

Furthermore there has been an upsurge in ad hoc parking in towns and villages with no designated spaces or where campsites are unable to cope with the spike in demand.

Not surprisingly, this has led to tensions in certain localities with residents complaining of an influx of vehicles and what they view as illegal parking.

Such is the level of concern the issue has been raised at local authority meetings around the country in the past week, including even in Kerry, where there are objections to motorhomes camping overnight in town centre car parks and beauty spots in and around Killarney.

There is growing talk of more restrictions, Council by-laws prohibiting overnight parking and barriers at scenic areas to prevent access by campers in places such as Hook Lighthouse in Wexford, where kerbside and pier parking in Kilmore Quay is also raising hackles.

While such prohibitions have already been introduced along quaysides in Galway city, Mullaghmore, Leitrim and Dungarvan, there were further episodes of negative reactions to campers developing in places normally welcoming of motorhomes in Kenmare, Portumna, West Cork, Westport, Ardmore and Achill.

Elsewhere in the Shannonside Tipperary village of Terryglass the local tidy towns organisation were moved to intervene over what they say is wholesale indiscriminate overnight parking, littering and anti-social behaviour. There were even complaints of illegal dumping at the popular and usually well respected Aire in Cobh.

The experienced campers cry foul, plead innocence and point the finger at others. It is not in the interest of regular and veteran campers to burn their bridges as they appreciate the symbiotic relationship between themselves and local communities.

Against this backdrop the enforced staycation is a gift horse that many landowners, vintners and local authorities appear to be looking in the mouth as their captive audience is crying out for more and improved camping facilities and services.
County Clare is a hugely popular destination with the motorhome fraternity, there are for instance only five campervan designated spots on the expansive Lahinch prom carpark, and no provision for overnight parking. This is not just an Irish phenomenon but is an issue being raised right across the UK with an increasing clamour for French style Aire amenities.
To compound these problems certain camping sites are seeking a minimum bookings of between 4 and 7 nights. Meanwhile the prices being sought for second hand caravans and motorhomes is rocketing this season. Anyone planning to splash out on their first campervan might well be advised to hold off until the winter.

There is little doubt that some wreckless first timers and newcomers are spoiling the camping opportunities for everyone else.

Pulling up willy-nilly off the street, blocking a working pier, encroaching on yellow boxes, taking over multiple parking spaces (with awnings & BBQ’s), over-nighting in a car park and leaving a mess behind for others to deal with hardly constitutes ‘wild camping’ or ‘going off grid’, as some like to rebelliously portray themselves, compounded in a minority of cases a downright reluctance and refusal to pay for any kind of services.

There is levidence that for some the so called ‘wild camping’ is little more than an excuse to have a party and piss-up on the dunes, in the park, at the forest or on the banks of the lakeside or river and try pawn it off as a camping weekend.

With all that to contend with, it hasn’t helped that the Garda authorities were prompted this week to issue a security warning such as been the spate of thefts of caravan and campervan vehicles in recent months. There is also concern about the safety and security of vehicles when camping.
The secrets of a Happy Camper

Camping is fun. Camping is good. Camping is good for you, so how do we keep it that way as the peak August bank-holiday weekends approach in Ireland and the UK, and newly converted camping fans snap up the last of the outdoors gear and bargains.

Here are some pointers, tips and insider info that may make the difference in ensuring that you remain a happy camper… and that everyone else enjoys the experience also.

First and last rule of camping – leave no trace. It’s self-explanatory, leave the camping spot the way you would like to find it, that includes cans, bottles and cigarette butts and of course the toilets. Basic respect for others.

Get online and join one of the many useful camping and motorhome forums on Facebook. These are run by vastly experienced campers with a wealth of knowledge which they are only too willing to share. While they are all glad to be supportive and help on a wide range of camping related topics, some of the questions being posed recently border on the ridiculous, trivial and downright lazy. They are not, as one recently pointed out, travel agents, so do make a basic effort to inform yourself and then avail of the vast knowledge and insights of your fellow campers.

Parking up at Lidl is not ‘wild camping’. If you are going to go wild, go wild in the country.

Camping does not come with batteries included. Be prepared to provide your own entertainment.

With that in mind a rain jacket, walking boots, a bike, a kayak or a surf board are vital pieces of camping kit as you take a break from Netflix.

Speaking of which it is worth investing in good gear, it’s a lifesaver and will last you a lifetime.

August means peak camping. The ‘full house’ signs are up all across the country’s most popular campsites. Try booking and plan ahead.

In this regard it is vital to inform yourself of all the options and real time info available from the numerous camping forums on Facebook. Just key in motorhome, campervans or camping and a range of options will pop up. There are even ones that specialise in camping with kids, camping for adults only, camping near pubs, wild camping, pet friendly camping and yes, wild camping.

Learn how to pack light in a one bag strategy but always bring the essentials like fresh water, tea, coffee, sugar, as you’d never know when you will get stuck.

No camping trip is complete without the obligatory BBQ. You will also need basics like a bottle opener/cork screw, matches, cool box/fridge, a mallet, spare gas, a torch, high-vis vest, first aid kit, toilet roll, and a good map (you won’t always have a signal for Google maps coverage). Make a list.

See also: 25 tips to make you a Happy Camper 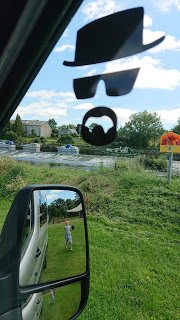 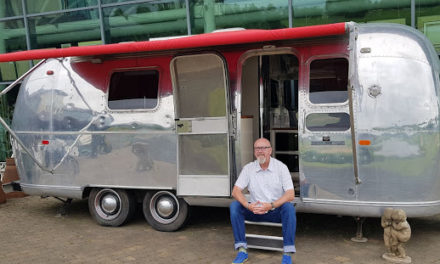 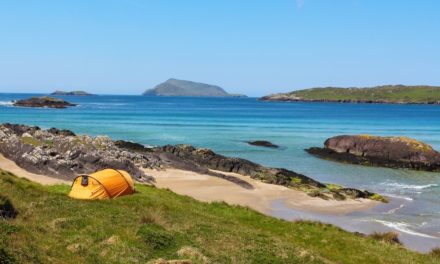 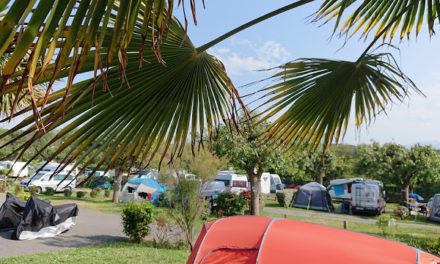 25 tips to help make you a Happy Camper 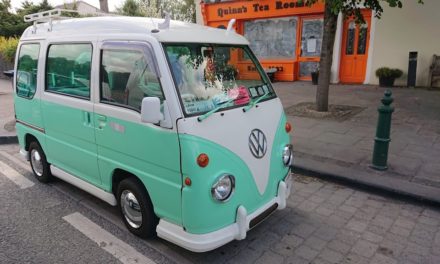