The sensational Sadies bring me back to my roots in Kilkenny 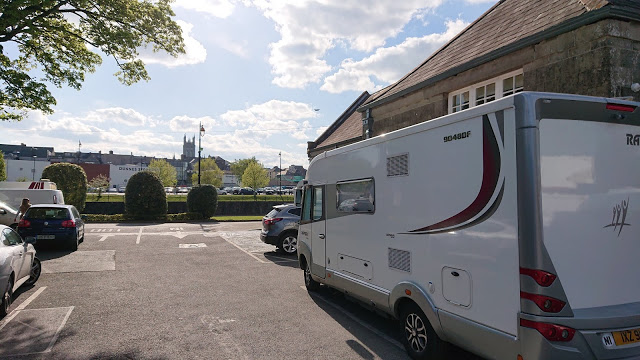 Kilkenny is a smashing place. With the confidence of a city with its medieval ancestry still standing in bold stone, yet compact enough to have the feel and familiarity of a provincial town. The natives are a friendly bunch.

It was Tom and Lucy Stapleton from Roscrea that first introduced me to joys of the alternative, roots and indie music circuit well over thirty years ago.
After some neglect on that front I had a hankering to check out and sample some of the eclectic sounds on the Kilkenny Roots Festival line-up, now in its 22nd year.
I have always had a soft spot for Kilkenny and am lucky to have some great friends there, but on this occasion I was up for sussing out a bit of urban stealth camping and test out a snug secret spot I had eyed out, within a short walk of the city centre.
Kilkenny is a smashing place. With the confidence of a city with its medieval ancestry still standing in bold stone, yet compact enough to have the feel and familiarity of a provincial town. The natives are a friendly bunch, with a pride in their jersey yes, but not nauseatingly so and a warm céad míle fáilte that knows the value of the visitor. 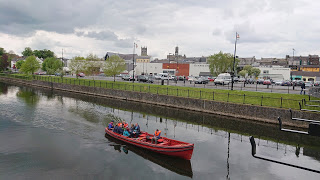 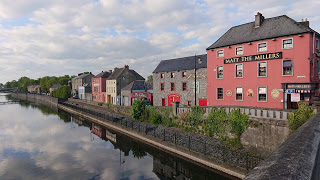 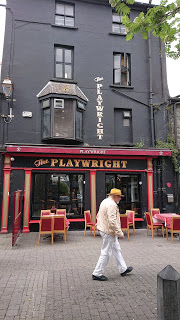 Kilkenny has always been a hotbed for festivals and music with Nowlan Park previously hosting Paul Simon, the Boss Bruce Springsteen and Andre Bocelli and Bob Dylan and Neil Young due to hurl out the tunes at the hallowed grounds on July 14 next. We used to head here in our youth, back in the days of motorbikes for the gigs in Kyteler’s Inn.
For it is in the festival scene rather than the stadium shows that you get to properly savour the personality of the city, its famed taverns, venues, cafes, restaurants on the banks of the River Nore. It’s a town that’s teeming with choice, hustle and bustle and bars all within handy walking distance, often connected by delightful lanes and alleyways such as the quaintly named, Butterslip.
This year’s Kilkenny Roots Festival ran across the May long weekend from Friday to Monday, but I had eyed out one gig in particular, The Sadies at the Set Theatre.
To my eternal shame I had never heard of The Sadies and never been to the Set Theatre at Langtons before but put all that to rights on Sunday night. Both the Sadies and the Set Theatre are a sensation.
In truth you are spoiled for choice at the Kilkenny Roots Festival with its winning formula of over 60 free gigs on the Smithwick’s Music Trail in 27 different pubs and hotels. Then there are the headline shows, which very often sell-out in advance with tickets ranging from €15 to €20.
This year these included Patty Griffin, The Delines, William The Conqueror (an interesting trio out of Cornwall), Robbie Fulks, River Whyless, Alejandro Escovedo, The Accidentals and Michael McDermott. But there was just something about the gimp of The Sadies that grabbed me.
We hit it lucky as we landed in Langton’s to collect our tickets for The Sadies later on that night, as The Shadowshakers a Dublin based Rockabilly swing band were giving it socks to get our Sunday evening off to a good start. It was a perfect long weekend vibe but I would highly recommend that their husky voiced lead singer has to add in a few Janis Joplin tracks to their repertoire, such a waste not to do so. 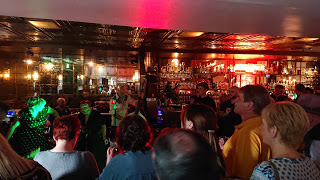 Our best laid plans to catch up with Loudest Whisper out of Fermoy in Syd Harkins came unstuck as the place was jammers, so we had to beat a hasty retreat and regroup.
We made a beeline for Ryan’s Bar to check out Broken Spokeson their sole festival outing. Looks like everyone else in town had the same idea. Now there is crowded, packed and atmosphere but this was downright dangerous; a claustrophobic crowd crammed into the place with not even elbow room, much less the chance to get a drink or listen to the band in anything remotely resembling comfort.
It’s great to see the event so popular and successful but an improved rostering and rotation of acts across the evening to help circulate the crowd and give everyone a fair chance to enjoy the Sunday evening would work far better in the long run.
We took respite in the Pembroke Hotel, which is a little out of the town centre hub and less manic. It was a fortuitous move as it’s here we got to catch up with the excellent Woodbine and their harmonious blend of bluegrass.
Two other favourites, Two Time Polka and the Niall Toner Bandhad already broke for the border and split town, and we’d have to catch up with them another day.
Full of anticipation and excitement we headed for the Set Theatre and our first encounter with The Sadies. Neither the venue nor the band were to disappoint.
The Set Theatreis class. Lots of space, well laid out, super acoustics, options to stand, be seated or lounge around. The venue has the capacity for about 400 with a spacious and well fitted out smoking area too. There was a great bar service and a pleasant vibe to the whole place. If you get a chance to take in a show or a gig there don’t pass it up. 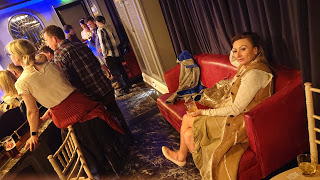 As for The Sadies, where do I start? I could start by making lots of comparisons and talk about influences, everything from Burt Weedon, Dick Dale, The Pogues, Iggy Pop, The Beatles, Simon & Garfunkel, Tom Waits, The Rolling Stones (back in their heyday when they had the energy, drive and interest!!!), hell they even played a mesmerising version of the Russian gypsy folk song, Dark Eyes (Ochi Chernye).
But to be honest such comparisons are pointless and are only useful insofar as they fail to capture the force of nature that is this rock n’ roll, country & western band from Toronto, Ontario. The band consists of brothers, Dallas and Travis Good, Seán Dean and Mike Belitsky. (Dallas and Travis are the sons of Margaret and Bruce Good and the nephews of Brian and Larry Good, who are members of the Canadian country group, The Good Brothers. So the two boys didn’t lick their musicianship or sharp wit and wicked sense of humour off the ground. I’m sure if they had a third brother their folks would not have been able to resist him being a boy named Sue).
Neither would I be surprised to find The Sadies walk off the set or soundtrack of a Quentin Tarantino movie straight up on to the stage at The Set Theatre in Kilkenny as it’s on stage they do their talkin’ as do their guitars. The Sadies are from a time where musicians played guitars, chords and harmonies hard, hard, hard and sang songs that had words that meant something to someone, somewhere, sometime, all the time.
Call me old fashioned but The Sadies sock it to you in the gut, the head and the heart and send you home sweatin’ only after they too have poured their heart, soul and all, out on the stage in front of your very eyes and ears.
If the average age of their audience on Sunday night in Kilkenny wasn’t ready for the pension, they would most likely have wrecked the joint…in the best possible way, old school, roots style of course.
We woke up on the banks of the River Nore nursing a hangover, but not for more whiskey, but a hankering we had for The Sadies, which will have to be sorted.
For campervans, there are lots of places to park up for the night in and around Kilkenny, with no on-street parking charges on a Sunday (or it seems a bank holiday Monday) and there is plenty of pay parking in the expansive public car park. 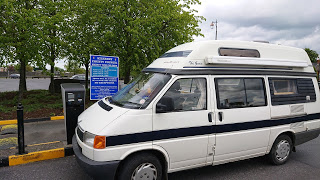 However, wouldn’t it be great if the local authorities in Kilkenny extended their warm welcome and reached out to motorhomes and campervans with a dedicated Aire space such as they have in Cobh and elsewhere? The profile of the punters attending such events as the Roots Festival would really appreciate it. I think it would work so very well in Kilkenny, if only they had space for campervan fans in their hearts.
Bob Dylan and Neil Young play Nowlan Park in Kilkenny on Sunday, July 14; The Cat Laughs Comedy Festival is in Kilkenny from May 30 to June 3; the Kilkenny Arts Festival runs from August 8 to 18, 2019. 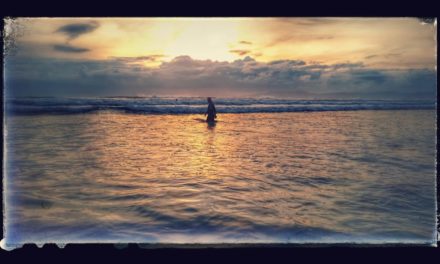 The Boys are back in Town…Ballyshannon town 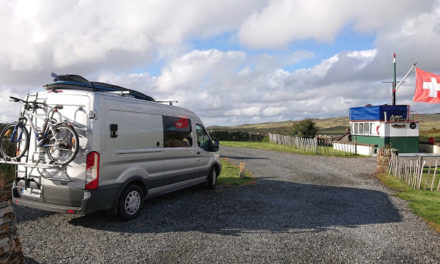 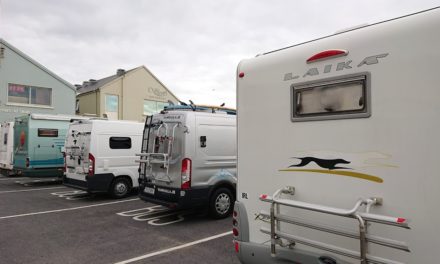 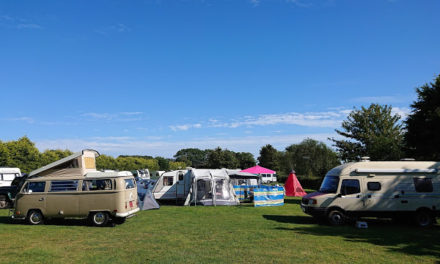